I have been where you are. I know what is going through your head. I am still there most days, but I have got some age on me now. I know things you do not know at 22, or do not believe yet anyway. It is hard to believe them, when all around you everything goes against it. But, I am writing this because at 22 there is still time. Time for you to change your thought process . Time for you to become head strong. Stronger than you already are so that when you do have years on you too, like me, you will be able to look back and think, “I’m so happy I was able to change my way of thinking.” The reason is this, your mind is one of the most powerful tools you have. It can help you, it can hurt you. It had done both over time to me. It continues to do it daily. I wish I had someone to say this to me at 22, really at 15.

My story begins at 15, really younger, but for the sake of this we will say 15. I looked around, I noticed what was going on. The girls getting the attention from the boys. Meeting them at the movies. I could not figure it out. I was outgoing, friendly, had plenty of friends but I was not one the one the boys noticed outside of the “friend zone”. I realized what they did notice. I became obsessed with it. Exercising like crazy, becoming “healthy” is what I said. But at one time my parents considered sending me off to treatment because my “healthy” behavior had gotten out of control and on my large boned frame, the weight I had lost down to was skeletal thin. However it paid off where I wanted it to at the time. According to what the “norm” was anyway.

At age 16 the first boy notice me and asked me out. We hit it off. blah, blah, blah, fell in love, married when we finished college at 21 and the rest is divorce history. I could not keep up the charade. I am not born to be a naturally thin person. I am not a skinny girl by birth. I began to gain the weight back when I began to eat again. Just eating healthy, minding my own business, still exercising like normal and eating like normal, but gaining weight above Skeleton’s level. After gaining the weight, this person who promised me forever, better and worse, realized he only like the size I was at 16, not the size I had become 12 years later. Immediately my mind went to the place , “no one will ever want me, love me, if I am not small”, really there was evidence of that right?

Time passes. My soul was searched. Prayers were prayed. I cannot tell you all scars heal, but now I know that body shaming is a real thing and a real problem. I actually lived it the entire time I was married not only by my ex-husband but his family also. The people out there that talk, whisper, stare. They are not secure with something they have, something they are dealing with. Yes, I said I struggle now. Because I did not change my thought process early enough.

That’s what I want for you. Change your mind now. You are good enough RIGHT NOW! RIGHT THIS SECOND you are GREAT, exactly how you were meant to be. Whoever does not see that, whoever comments to the contrary does not deserve a second thought. I know it is not easy. I KNOW it is not easy. But you can do it. You HAVE to do it. Now. Change your thought process now and stop body shaming yourself. NOW.

So, last week, I think it was last week…I’m really not sure because of the carousel I’m always on seems to be moving faster and faster these days, but sometime in the not so distant past I wrote a post about how I felt like a bug trapped in a jar concerning the occurrences in my life at this time.  I know my current post photo does not have a bug or a jar, but let’s face it, I’m not a bug kind of girl. After what I thought was a pep talk and hormones possible subsiding, I could see my way out through one of the air holes created by the ice pick in the lid of that damn jar. So I thought, I will not be a bug, I’ll be a fairy, or a butterfly (yes, I know, still a bug/insect). Much more appropriate for me than just a bug. And then I found this wonderful picture of a REDHEADED fairy trapped (okay, the bell jar is just turned upside down, but come on folks, use some imagination) and I was hooked, because you guessed it, your Southern Belle is a fiery redhead. Now that I’ve set the scene for what I thought was the upswing on this being trapped thing, let me invite you inside to the events of what has really happened.

Like I mentioned, I had a really good talk with one of my closest friends and also with my daddy, both of which help me sort through some of my trapped feelings. Sometimes I just need to talk things out and have someone else listen to tell me what is really going on. So towards the end of last week, things were looking up. I could see the possibility of squeezing my fairy/butterfly self out of one of those air holes in the jar and I knew that I would be just fine. I could feel the air fill my lungs again and my chest start to relax. But this week brought on its own set of challenges for trying to escape the jar and now, fairy/butterfly or not, I feel like I’ve been knocked back to the bottom of the stick and some of the air holes have been closed up.

I’ve learned, not a lesson I didn’t already know, just one I didn’t know I would have to learn again, that ……..well, I’ve drawn a blank. I don’t know how to put this eloquently, how to write it in pretty words, or how to make it sound anything but other than what it is. I’ve learned that some people are just mean, spiteful, hateful, and will keep you trapped just because they can. Yes. I am an adult. Yes. I’ve learned this lesson a long time ago, however I thought I had chosen wiser this time in my selection of not just friends but work associates as well. Now, I seem to be learning that the company you work for, no matter how “good” they seem to be, will keep you trapped. Even if you are one of the best fairy/butterflies they have. Simply put….because the can.

So, I’m kind of back to where I started a week ago, although not quite as depressed and melancholy about it. You see, there are several things “these people” may have miscalculated when they “thought” they could keep me trapped. True, they do hold the lid to this jar. True, they can keep me trapped for longer than I anticipated. But….follow me here people. I will squeeze out of one of those air holes. Several things happen when you tell a stubborn, redheaded southern belle that they are trapped. The first is I do cry. The next is I get mad. The last is I stay mad enough to stick it out and do what they said I couldn’t do. I thought, well, even if you squeeze through the air holes your wings will be too tattered and torn to do anything with. You’ll never be able to fly. But then I read this….. 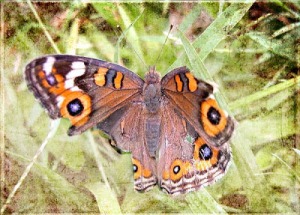 That’s right. If my wings didn’t get a little tattered and torn along the way, I may be eaten by these predators that want to keep me trapped. But once I’m free I can still fly, and I will.

What the Belle has been up to